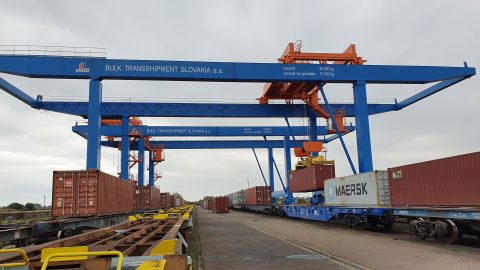 Slovakian terminal on Ukraine border lies idle: ‘we have plenty of space’

The terminal of Dobra on the border of Slovakia and Ukraine has a lot to offer, but only a few trains actually run through the border crossing. That is a pity, because there is no congestion at this border point, says Martin Koubek from Metrans, who plans to run 4 Eurasian trains via Dobra in October alone.

There are more people who share this sentiment. On Tuesday 28 September, there was a meeting of high-ranking officials at the terminal, looking at how its potential could be consumed in a more efficient way.

The meeting was joined by the Chinese ambassador in Slovakia SUN Lijie, The Ukrainian ambassador of Slovakia Yurii Mushka and the Slovakian state secretary of the Ministry of Transport and Construction Jaroslav Kme. The general director of ZSSK Cargo Roman Gono also joined the gathering. What all these people have in common, is that they would like the route via Slovakia and Ukraine to grow on the New Silk Road.

Currently, only 1.5 per cent of the total capacity of the terminal is used. The main route via Malaszewicze-Brest is still the dominant route for trains between Europe and China. “Even though there is a lot of congestion at this border crossing, the majority of the traffic still runs via Belarus”, says Koubek.

“The main reason is probably because of the costs. The route via Slovakia and Ukraine is more expensive than the main route”, the Metrans representative explains. Moreover, political instability has long impacted the reputation of Ukraine as a transit country, but this is no longer the case, as many operators have pointed out.

Another measure of support is the renewal of the terminal. “There has been mention of a renewal project, which could increase the capacity of the terminal to even 9 trains per day. Currently, it has a capacity of three trains. But, as long as there is no demand, this development project will not make a difference”, said Koubek.

Therefore, the main aim right now is to attract interest from the international market for the route. “This is why there was a delegation from China. We would like to gain their attention for the route via Dobra.”

But equally important is eastbound traffic, which is essential if a roundtrip is to succeed. This became evident when Metrans launched the Xi’an-Dobra- Dunajska Streda train in Spetember last year. Although it started promisingly, the eastbound train did not set off, and hence the train was stopped.

Up and running again

This October, the train will be up and running again, said Koubek. “The problem with the eastbound train was the Russian sanctions on certain cargo, as the train still needed to bypass Russian territory. “This has now been solved. The Glonass seal which is required for transit through Russia will be applied at the Ukrainian border, so it can continue its route through Russia.”

The Xi’an-Dobra- Dunajska Streda train will do 4 roundtrips in October, and is a good example of how the terminal of Dobra can be a suitable gateway on the New Silk Road. “It may be a bit more expensive than the main route, but we can reach China in 18-20 days. Actually faster, but we still have to deal with congestion at the border point of Dostyk. Once that is resolved, we can even do 12 days.”