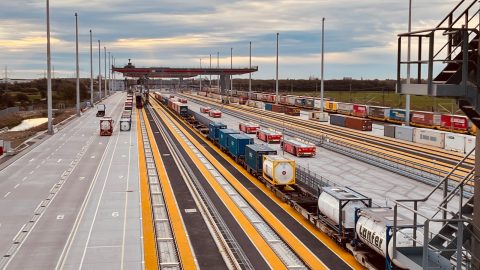 Megahub Lehrte, the newly built and modern terminal in Hannover, Germany, received its first westbound train from China. The train was operated by RTSB and arrived in the hub on 7 August.

Carrying 42 40-foot containers originating from various Chinese cities like Suzhou, Shijiazhuang, Dongguan and Changsha, the train arrived in Malaszewicze on 4 August. After reaching Megahub Lehrte, the cargo was distributed to various destinations, including Regensburg, Ludwigshafen, Duisburg and Munich in Germany, Malmö in Sweden, and Verona in Italy.

More trains in both directions

A second train operated by RTSB arrives at the German terminal today, Thursday, 12 August. This one carries 39 40-foot containers from Chongqing, Xi’an and Chengdu. However, the potential of Lehrte’s connection with China will be fruitful in the opposite direction. As RTSB explains, an eastbound train is already organised for next week to depart from the terminal and arrive at Xi’an.

The potential of the service and Megahub Lehrte’s infrastructure and dynamic are acknowledged by RTSB, which aims to make the service daily in the near future. Specifically, it aims to build an intermodal network for imports and exports between Europe and China using the terminal as a reference point.