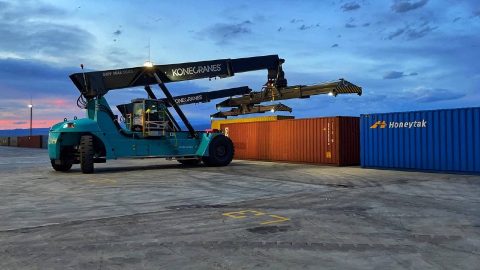 Eurasian transit acquired a new transhipment terminal on the Kazakh-Chinese border. The new terminal started operating a week ago, with the first ten trains in the China-Europe direction passing through it. Dostyk TransTerminal LLP undertook the construction of the site, while PTC Cargo LLP is managing it. The project is still in the first stage of production. After works conclude, the terminal’s final capacity will reach 700 thousand TEUs.

The terminal’s primary purpose is to facilitate cargo transhipment from the 1435 mm track gauge that China uses to the 1520mm gauge used by Kazakhstan. Estimations indicate that it will also contribute to increasing the volumes of cargo handling along the China-Europe route. The transhipment terminal covers an area of 150 hectares and is positioned six kilometres west of the Dostyk station and very close to the Dostyk-Alashankou border crossing. Currently, it provides a throughput capacity of 100 thousand TEUs, but it will undergo further expansion in the future.

Construction of the terminal is the first stage of a broader project. Specifically, the PTC Holding Group of Companies aims to develop a multifunctional zone that will also include an industrial area and a dry port. The rerouting of Eurasian services from sea to rail, for instance, resulted in increased container traffic that now needs better handling. As a response, PTC decided to launch a large scale project that will benefit both the cargo handling and the region’s development, said Shyngys Tuleushin, CEO of the terminal managing company PTC Cargo.

Dostyk transhipment station lies at the Kazakh-Chinese border and is a crucial component of Eurasian transport. The Dostyk-Alashankou border point is the busiest border crossing along the New Silk Road and frequently subject to traffic bans due to congestion. Consequently, the new terminal, which is very proximate to Dostyk, will have an ancillary role for better traffic management.

Apart from transhipment processes, it will also offer storage, repair, formation of container block trains crossing the Kazakh-Chinese border, as well as consolidation of goods by type of transport and performance of warehouse and terminal operations.