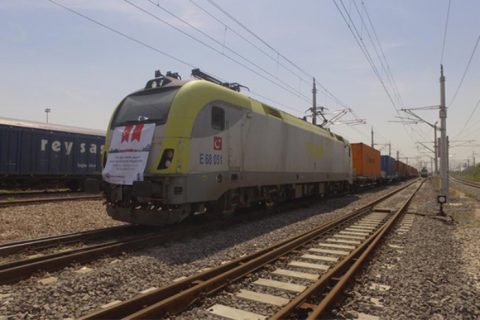 On 24 May, Turkey sent off the 6th and 7th China-bound trains towards Xi’an. The trains departed from Izmit, a city in Turkey’s Kocaeli province near Istanbul. They consisted of 41 containers in total, carrying 2,250 tons of melamine-coated chipboard. In about 12 days, they will reach Xi’an through the Middle Corridor and the Baku-Tbilisi-Kars rail freight route.

The trains are operated by TCDD Taşımacılık AŞ, in cooperation with Pasifik Eurasia Logistics. The two companies have already sent five trains towards Xi’an since late 2020, comprising 201 wagons, 216 containers and 8,500 tons of cargo. The main export products to China were white appliances and chemicals, with the newest addition being the melamine-coated chipboards.

The first train from Turkey to Xi’an departed on 4 December 2020. Almost a month later, on 7 January 2021, the second one was already in China. Turkish officials said that the service would become regular on the timetables with a frequency of two trips per month. It seems that the involved parties did not fully reach their initial goal.

Nevertheless, it is positive that two more trains are already travelling tom Xi’an. With seven Turkey-China trains in total, the service proves to be viable. Companies like Hupac and Rail Cargo Group have described how Turkey’s robust industrial production is a factor for increasing export demand to China. Understandably, Turkey wants this service to perform well since it has a significant potential for revenues in such an extensive and diverse market like China.

The Baku-Tbilisi-Kars railway line that extends to the New Silk Road’s Middle Corridor is a central component of the Turkey-China route. Turkey-China trains and trains from other companies use it as an alternative to other more used Eurasian corridors.

As Turkey’s role as a New Silk Road hub grows, so does the significance of the BTK line. Specifically, estimations from Turkey’s side predict that its volumes will grow even more during the coming years, reaching 1,500 train operations and 60,000 TEUs between Turkey and China yearly.