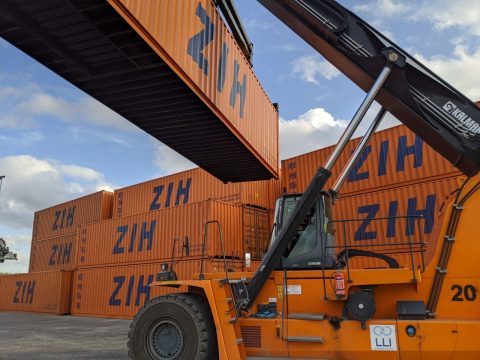 How rail and air share the fast-growing pie in Liège

Nearly two years ago Alibaba made its choice for Liège as its first European logistics hubs. The warehouses are not there just yet, but construction has started on the premises of Liège Airport. As soon as next year, the Chinese e-commerce giant has its headquarters in the Belgian city. Aviation as well as rail freight are to benefit from the settlement. How do two competing modalities share this rapidly growing pie?

RailFreight.com visited the Belgian hub to meet some leading figures of Liège’s logistics and transport industry.  We met with Vincent Brassinne, administrator of Liège’s rail freight terminals as well as Bert Selis, VP Commercial Cargo & Logistics at Liège Airport and Dongqing Zhang, Cargo Development Manager at Liège Airport. The interviews will be available in detail during the digital version of the European Silk Road Summit on 10-11 November 2020.

All partners underlined that collaboration between different freight services is of paramount importance. Specifically, the district’s emergence as a multimodal crossroad with sea, rail, barge and air connections, can be beneficial for everyone, as it attracts more partners. Alibaba is a characteristic example. Despite fierce competition from the Netherlands, the e-commerce company chose Liège as its first European hub. This already resulted in an increase of volumes from China, before the warehouses were even there.

These volumes are for a good part on the train. The rail terminal of Liège is on the China-Europe network since 2018. Currently, it receives five trains from China per week: four from Zhengzhou and one form Chengdu, says Brassinne, while he walks us through the orange ZIH containers, stapled in pairs of three on the terminal. He stresses the advantage that Liège has in terms of position and network. He does not consider aviation a competitor. “We run a side-to-side business with the airport”. The fact that they collaborate with different customers results in an “equal sharing of the pie”, he says.

Right next to the rail terminal lies the growing and flourishing airport. “Multiple aeroplanes fly from and to China every day, using the airport’s facilities”, Selis explains. “China is gradually becoming more important, it now constitutes a third of the airport’s overall business.” Furthermore, he points out that Liege Airport has become a logistics platform that does not compete, but works together with rail. “It is more of a balance game, that relies on the needs of the customers. For each type of cargo there is a suitable transport mode.”

Nevertheless, the airport has faced challenges during the COVID-19 crisis. Due to a surge in rates for air freight, some of the usual air cargo has shifted to rail, which has proven a more balanced modality during the pandemic. “Some of this cargo may return, but some may not”, acknowledges Zhang. According to Selis, there is a tendency to become more green in transport, which results in a shift to rail. “But there will always be a need for air freight, mostly because of the transit time.”

Liege in the centre

All partners seem to agree on one thing: Liège must grow collectively. With that being said, it is understandable that the different modalities of the European hub not only avoid competing with each other, but are aware that their cooperation can prove extremely beneficial. “There is enough pie for everyone, and this pie is only getting bigger”, concludes Zhang.

Do you want to hear all about the development on the New Silk Road in 2020? On 10 and 11 November the European Silk Road Summit 2020 takes place, this time as an online edition. The impact of the pandemic, the current volumes and the forecasts for the year to come are certainly among the topics on the programme. Have a look here or register here.