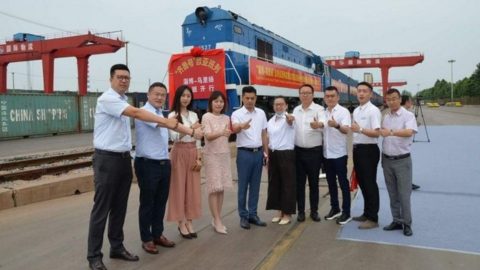 A new container train service was launched between China and Russia. It linked two special economic zones in the countries, which are named after the cities where they are located: Zibo and Ulyanovsk. The authorities of Russia’s Ulyanovsk Region plan to construct a new intermodal terminal to handle the containers heading to or from China.

One more region in Russia got a direct rail freight connection with China. It is Ulyanovsk Oblast in the Volga Federal District. The freight train departed from the Chinese city of Zibo on 29 June. It arrived at the Ulyanovsk-3 freight station in the western part of the city on 14 July. As a result, the distance of 9,000 kilometres was travelled in two weeks. The first train between Zibo and Ulyanovsk consisted of 53 containers loaded with a wide range of products including car parts, building materials, sporting goods as well as equipment for oil and gas industry.

The return train will be organised in the coming days. It will be loaded in Ulyanovsk with Russian grain and sunflower oil. The estimated loading level of the first return train is at least half. In order to increase this figure, TransContainer, Russian Railways (RZD) and the authorities of the Ulyanovsk special economic zone are talking with the local business to attract more freight for the future shipments. It is worth to note that the Zibo – Ulyanovsk – Zibo train will run regularly departing from each terminus every three weeks.

Two special economic zones started mutual negotiations on the direct train service between Zibo and Ulyanovsk more than a year ago. In April 2019 the authorities of both areas concluded a cooperation memorandum. The key reason for the new container train is to facilitate and speed up the bilateral trade between China’s province of Shandong and Russia’s Ulyanovsk Oblast.

Before this, the delivery of the Chinese goods from Zibo to Ulyanovsk was very long and complicated. The first option is a multimodal route from the Chinese seaports to the Russian harbours in Saint Petersburg or Novorossiysk, where the containers are loaded to the flat wagons for the further delivery by rail. In this case, the entire travel time takes around two months.

The second option is provided only by rail. However, it also takes more time than a direct train connection as the containers are delivered via the Vorsino intermodal terminal in Kaluga Oblast, which is located in more than 900 kilometres westwards from Ulyanovsk. Then, the containers are transported eastwards from Vorsino to Ulyanovsk. This creates an additional detour that takes several days or even one week and, therefore, complicates the delivery.