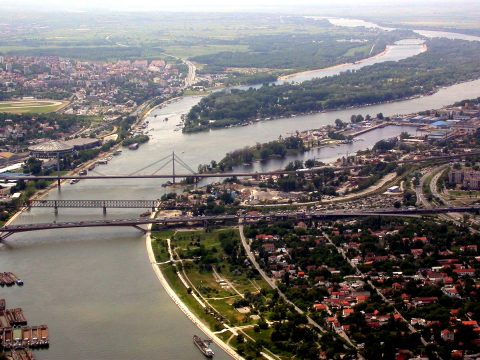 The excavation work of the Cortanovci tunnel on the Belgrade-Budapest railway line has been completed. This vital new railway link connects Hungary and Serbia. The tunnel lies on the Stara Pazova-Novi Sad section of the railway line and is now 91 per cent completed.

The works were carried out by RZD International, a subsidiary of Russian Railways. The company is implementing a large-scale project for the reconstruction of Serbian railways on a particularly important section of the Belgrade-Budapest line. It is here that two unique structures are being constructed. The tunnel and the viaduct in Čortanovci constitute a unified complex of railway structures that will ensure the speed of trains up to 200 km/h.

The Cortanovci tunnel consists of two parallel single-track tunnels with a total length of 2.2 kilometre. On Friday, workers completed tunneling in the left bore from the northern and southern entrances. The right bore was dug through in early April.

Apart from the tunneling, more than 1.3 linear kilometers of permanent lining of the tunnel have been completed, anti-landslide protective structures have been equipped, and one of two transverse service walkways has been excavated. In total, during construction, it will be necessary to excavate more than 300,000 m3 of soil and lay more than 170,000 m3 of concrete using almost 12,000 tonnes of reinforcement and steel metal structures.

The new milestone was highly lauded by Deputy Prime Minister of the Republic of Serbia and Minister of Construction, Transport, and Infrastructure Zorana Mihajlović, who visited the construction site on Friday. Earlier, he pointed out that infrastructure remains an important driver of the economy and development despite the coronavirus epidemic.

The Belgrade-Bupapest line will see some major imporvements in the railway connection to Budapest. The Novi Sad – Subotica – Kelebia line is to be upgraded and double-tracked. This will be carried out by China Railway International Group and China Communications Construction Co.