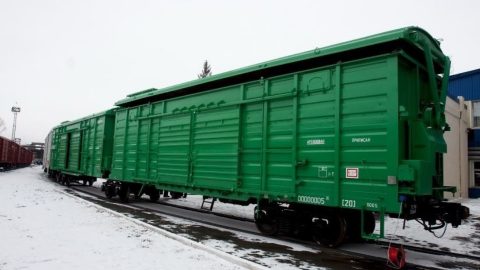 RZD Logistics, a dedicated subsidiary of Russian Railways, is testing  new rail freight services between Ukraine and Central Asia. They are devoted to the delivery of sanctioned goods that were previously not allowed on transit via Russia. As the new test routes run via Russia, they do not require ferry links and allow the customers to reduce the delivery time.

For testing the new rail freight connections from Ukraine to Central Asia, RZD Logistics has applied covered wagons instead of containers. “Rolling stock was chosen by the shipper. A covered wagon has a greater carrying capacity than a container. Therefore, it is more profitable for the shipper”, the Russian company explained to RailFreight.com. In late May the first covered wagon departed from Kuryazh station in Ukraine, near the city of Kharkiv. It was loaded with 68 tonnes of household goods. The final destination is the Almaty-I station in Kazakhstan.

To run via Russia, the covered wagon was equipped with a necessary electronic seal at the Belgorod station. Before entering Kazakhstan, the device was removed. At the moment, the pilot wagon is running through the Central Asian state. The entire travel time will be around three weeks. Such quite a long travel time could be explained by the features of the test shipment: it is the first transit freight delivery from Ukraine to Kazakhstan via Russia using the covered wagon. However, it is not the final result. There is a potential to reduce the delivery time by up two weeks or even less.

Meanwhile, the Russian company hopes that the new service will be popular among the customers due to its faster and cheaper opportunities. “The transit of sanctioned freight is not only for container traffic and not only on the Europe-China direction. Taking this into account, we have developed and implemented a transit service in covered wagons to the CIS countries (former Soviet states – RailFreight). Previously, this freight was delivered by using two railway ferries through Georgia and Azerbaijan. Delivery via Russia is not only more convenient but also 15-20 per cent cheaper. Based on this, we consider the new service to be very attractive for shippers and plan its further geographical scaling”, CEO of RZD Logistics Dmitry Murev noted.

RZD Logistics did not disclose the name of the customer that ordered the delivery, or the exact types of goods. “It is consolidated freight”, the company responded briefly. At the same time, it is testing other shipments from Ukraine to Central Asia. The new batch has already departed towards Kazakhstan. It consists of six covered wagons also loaded with household goods. These six wagons are running through Russia now.

The third test shipment is also on its way via Russia. It has just been proceeded at the Belgorod station and is heading towards Tashkent, the capital of Uzbekistan. This batch of freight includes two covered wagons with powdered milk. “In the future, the traffic volume will depend on the demand of shippers”, RZD Logistics summed up.