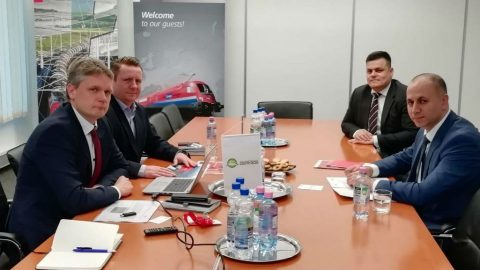 Hungary and Azerbaijan come closer together

ADY Container, subsidiary of Azerbaijan’s national railway company and the Hungarian subsidiaries of the Rail Cargo Group, which is a branch of the Austrian ÖBB have joined forces to organise container freight between Central and Eastern Europe, Azerbaijan and Central Asia.

The meeting members discussed joint measures for identifying potential cargo bases, collecting and sharing statistical data on freight, and establishing a legal framework for the partnership.

The Hungarian representatives acknowledged that Central Asia, with Azerbaijan as a transit hub in the region, plays an important role for rail freight through Hungary. However, until now most traffic flows to and from Asia have been through Poland and Russia.

The route via Azerbaijan, and further on via the Caspian sea to Kazakhstan is gaining popularity. The Middle Corridor, as it is also called, could be a viable alternative to the northern route, which is considered as politically unstable.

In November last year, Rail Cargo Group signed a cooperation agreement with the port of Baku and the Dutch Cabooter Group, to operate a blocktrain running between Venlo in the Netherlands and Xi’an in China via the Middle Corridor.