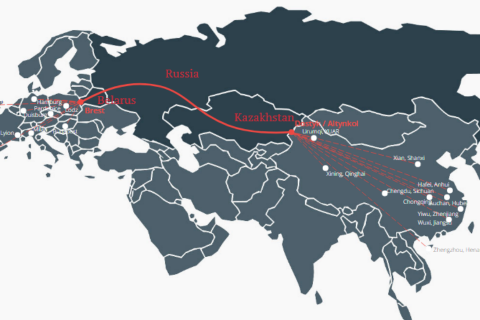 From Kazakhstan to Belarus in 4.5 days now possible

New Silk Road operator UTLC ERA has announced plans to increase container transit through Kazakhstan up to 1 million TEU per year year in 2020–24. This will be made possible due to the digitalisation and optimisation of cargo transport on the 1520 mm gauge railway section, the company said. Towards this aim it established the ‘One million club’ initiative, realised together with UTLC ERA shareholders, partners and customers.

The total amount of container transport on China – Europe – China routes reached approximately 102 thousand TEU in the first four months of 2019, about a 16 per cent increase to the same period of the previous year, said the operator. Out of this gross volume UTLC ERA shipments accounted for about 85 thousand TEU, a 45 per cent increase year to year. Meanwhile, the overall transit volume decreased on competing railway corridors on the 1520 gauge section, which runs through Kazakhstan, Russia and Belarus.

UTLC ERA is actively engaged with its clients to develop and expand the types of goods transported from Europe to China.“The transit potential of Kazakhstan is the most important part of the national development strategy. UTLC ERA and Kazakhstan Railroads are realising a comprehensive plan to develop transit across the 1520 gauge due to the optimisation of dead mileage, transport planning and also the coordinated tariff policy of EAEU countries without cutting tariffs for transit across Kazakhstan”, noted aid Alexey Grom, president of UTLC ERA.

According to the company, it has already significantly reduced the transit time of the route by 14 per cent in the first four months of 2019. The journey now takes just over five days. “Now, our trains move with a speed of 1,020 km/day, which is 74 km/day more than in the previous year. During the current year we plan to accelerate up to 1,073 km/day.” With this speed increase, the journey could be made in four and a half days. “We – Russia, Kazakhstan and Belarus – have come to understand that more can be achieved when we work together”, Grom added.

Another noteworthy accomplishment is the east-west balance of cargo flows on the narrow-gauge section. According to UTLC ERA, the company managed to increase carriage load going from Europe to China on par with Chinese backhaul load by the end of last year. This was accomplished thanks to the successful work with European manufacturers, optimising business processes and expanding the types of exported goods to include less expensive bulk items (foodstuffs, cellulose, etc.), the operator explained.

The full name of the company is the United Transport and Logistics Company – Eurasian Rail Alliance. Today, it operates on 57 routes from China to Europe. In 2019 four new European destinations were opened: Neumarkt, Barcelona, Bremerhaven, and Luxembourg.