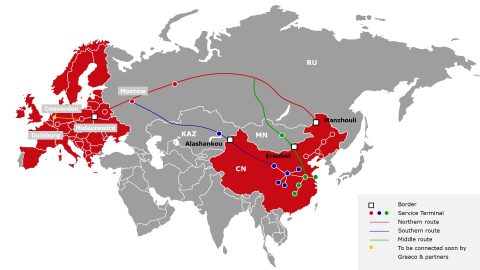 Door-to-door between Coevorden and China

The road leg of the transport chain entails trucking between Coevorden and Duisburg. Here, the company makes use of existing train connections to eight destinations in China. But that is for now, explained Ben Blog, General Manager of Graaco. “The demand is there. A lot of companies are interested in this connection. It will not be long until we can offer a direct train connection between the terminal of Coevorden and China.”

The multimodal connection is a new addition to the services offered by the logistics provider. From this month, it offers the full package: transshipment in Coevorden, customs handling and its own transport network in Europe. For transportation and the entire settlement in China, Graaco works with local partners.

Conditioned goods can also be transported with the use of specially designed containers. “If desired, services can be provided such as exemption from containers, customs handling, plant health inspections and gas inspections of containers”, Graaco mentioned.

The direct rail link will be named C2C (Coevorden to China). “We want to organise combined train sets to Brest (Belarus), from where they can be distributed to various Chinese cities”, explained Rob Spierings, Strategic Business Development Manager at Bentheimer Eisenbahn AG, operator of Twinport Bentheim Coevorden.

According to Graaco, adding Coevorden to the New Silk Road is a great contribution as “Coevorden is the only place in the Netherlands which has a direct connection to the German rail network”. Indeed, EuroTerminal Coevorden is situated at the border with Germany and forms a twin terminal with its German counterpart in Bad Bentheim, which lies 70 kilometres further south-east. Moreover, it is the northernmost terminal on the Dutch-German border. With hinterland connections to countries north of Europe, the terminal in Coevorden is becoming more important.