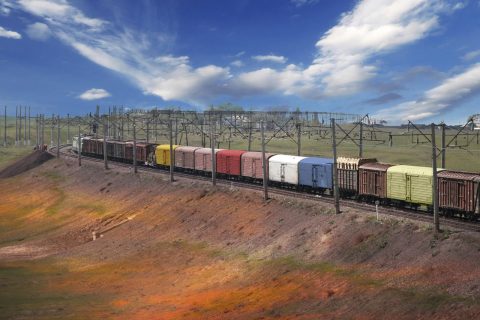 The Dutch logistic hotspot in Venlo has two new train connections. Twice a week a train departs in the direction of China via the Middle Corridor, while another twice-a week service is launched to Mortara in Italy.

The new service to China is part of a train chain that starts at the Cabooter Terminal in Venlo, moving to Istanbul. From there it travels further to Baku in Azerbaijan, where it calls on the port of Baku for the sea leg of the journey. In Kazakhstan, the train will resume its trip to China. The first train has departed on 5 November.

The new connection has unfolded thanks to a partnership between Mars Logistics
Turkey, Azerbaijan Railway and the Port of Baku. Cabooter Group and the Port of Baku gathered all parties to make use of the existing connections between Baku and China, designing a new route to the Netherlands, explained Caboother Group.

“This train will call on the Cabooter Terminal twice a week, but it will eventually become a high-frequency shuttle. Capacity has been made available for more connections, which will be realised in 2019. The completion of the new rail terminal at Greenport Venlo will create even more opportunities for new connections with China on the medium-long term.”

“This train connection is the result of a visit that took place at the beginning of this year, when a delegation from Baku visited Limburg”, the company continued. CEO Hans Cabooter explained: “The Province of Limburg organises a lot when it comes to foreign trade relations. The fact that we now have a train connection with China
is amazing. We could not have realised that without this support.”

The route via the port of Baku – the Middle Corridor – is steadily gaining popularity, accelerated with the launch of the Baku-Tbilisi-Kars railway. “The Cabooter Group Venlo is involved as an advisor in the development of two rail terminals in Azerbaijan. An intermodal terminal and a terminal aimed at handling wagon cargo traffic are currently under construction.”

The Cabooter Group has also launched a new service to Mortara in Italy. A train leaves twice a week from the Kaldenkirchen terminal, operated by Shuttlewise. With this train, Northern Italy is almost entirely covered by train traffic from Venlo, the Cabooter Group pointed out. Except for Mortara, trains run to Busto, Melzo and Domodossola.