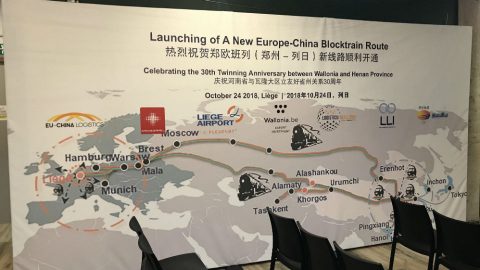 The first direct train service between Liège in Belgium and Zhengzhou in Central China became operative on 24 October 2018. It is the latest block train route added to the railway network between Europe and China.

The service offers weekly departures between the hubs, with no additional stops on route. The journey takes 14-16 days, and the train is operated by the Chinese ZIH. It is the second Belgian city on the New Silk Road, after Antwerp was added to the network earlier this year. From Zhengzhou, train services are currently available to Malaszewicze in Poland and Hamburg and Duisburg in Germany.

The addition of the Belgian city of Liège to the Eurasian railway network is not a coincidence. Chinese e-commerce giant Alibaba is currently considering opening a European branche, with Liège as a possible homebase. However, the Dutch town of Den Haag has recently entered the competition to house the European branche of the company. Negotiations are still ongoing, according to media reports.

If Liège is to be place of choice, Alibaba will settle in the airport zone of the city. The European logistics complex of the company could grow to 380,000 m2, the size of fifty football fields. It would be the cream on top of the 30th anniversary of cooperation between Wallonia and Henan province.

Henan as a hub

On the Chinese side, Henan is to gain importance on the New Silk Road as the Chinese government has recently announced its plans to launch it as a central hub, from where the distribution of goods to the rest of China should take place.

“Henan already has the infrastructure to support its position as a hub. There is an extensive railway network to all corners of the country. Nine of the mainlines run through the province, in addition to four sublines. Moreover, it hosts a high density of highway, spanning six thousand kilometers. Henan also has the advantage of being flat, in contrast to the mountainous south of the country”, explained Letty Zhu, who works as a lecturer at the Breda University of Applied Sciences earlier.