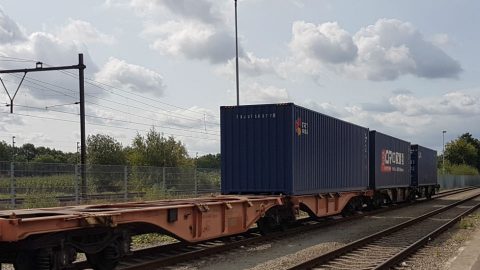 One-and-a half year ago Lenovo decided to ship its products by train. Before a computer made in China reaches the customer in Europe, it has endured severe climate conditions, border controls, and loading and unloading at terminals in the middle of nowhere. Dick van Beek, Global Logistics Director EMEA at Lenovo, shares his experience with Eurasian railway on the New Silk Road Congress in Tilburg on 27 September.

“We have a build-to-order business model, which means we only start manufacturing after we have received an order”, van Beek explains. After the product is manufactured, it is put on the train. From station to station, the journey takes two weeks, but of course there are origin and destination lead times, explains the high-tech specialist.

“Previously, these shipments were done by ocean freight. The lead time by ship is much longer.” When Chinese rail operator CDIRS offered competitive rates, the decision was made to use rail by the electronics giant. With an attractive rate and shorter lead times, rail transport was clearly beneficial for the business model.

However, the agreement with CDIRS was not without its conditions. Whereas shippers usually work with a single party to realise an end-to-end shipment, the contract with the Chinese operator was an exclusive one, leaving out any intermediates. We work with several partners to realise the shipments, which requires careful coordination and has challenges regarding the shipment visibility. This takes a lot of time and effort”, van Beek explained.

One reason why the shipper cannot sit back and relax, is that the shipment via rail is still not without hurdles. “We have witnessed a lot of delays at the Polish-Belarusian border crossing of Malaszewicze-Brest. The facilities are not completely ready, and sometimes there is often work in progress. At one point, a bridge was closed and we could not make use of the track. Circumstances like these make it hard to predict a lead time.”

Moreover, there are not enough trains departing the Polish terminal in the direction of Europe and there is a lack of reefer containers. “We rely on containers with temperature control during the winter period in order to safeguard the quality of the product. But the operator currently does not own enough of these reefer containers, and they need around seven weeks to return to Chengdu for the next shipment. We often have to fight for a spot on the train, as we are not the only shippers using this service”, van Beek added.

Although the lead times have improved, the reliability of the transport mode remains an issue, the director said. “We build in a buffer in the delivery time to prevent any disappointment, but if there is an actual delay this is hard to explain to the customer, who does not understand how the journey is organised.

“As a shipper relying on the services of an operator, it is hard to influence the transport process. And there is the language barrier, making it difficult to push for changes that are important for the reliability of the manufacturer. We are completely dependent on the operator, and this makes it difficult sometimes.”

Despite the hurdles, there are many positive aspects of the train travel, van Beek explained. When Lenovo first considered making the shift to rail, it carried out several tests. Despite the rough journey, the products arrived at the destination in good shape. The shipment is followed with a track and trace system, allowing the shipper to react to events right away.

“The number of trains is growing and the facilities are improving. At the moment the lead time is stable. The service is still in its infant years, but has a lot of potential.”