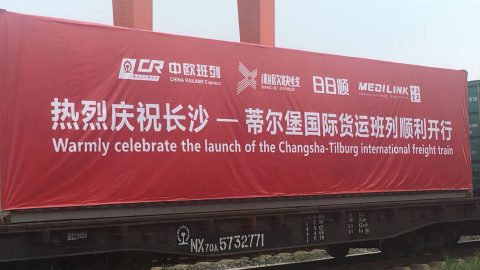 On Friday a train consisting of 41 40-foot containers with consumer goods such as clothes, accessories, office supplies departed from Changsha in China on its way to Tilburg in the Netherlands. Here, it should arrive on Monday 3 September. The train is trial run and may become the second direct train service between China and the Netherlands.

The test is initiated by Hunan Xiangou Express Co, a Changsha-based company in the province of Hunan. JSC RZD Logistics, a multimodal logistics operator in the CIS and Baltic countries, organised the shipment across the route. In the Netherlands the load is handled by GVT Intermodal, which operates the terminal in Tilburg.

The train exits China at the border crossing of Zamyn-Üüd, to continue its journey through Inner Mongolia, Russia, Belarus, Poland and Germany. The expected transit time is 17 days. If successful, the service will be operated two to four times a month and with sufficient demand, a return route could also be realised.

“Today we see that Changsha is gradually transforming into the center for the consolidation of cargo from Central China. It has good perspectives of growth, due to the development of certain sectors of economy. Tilburg, on the other hand, is the Netherlands’ second largest transport logistics hub, equipped with modern infrastructure necessary for handling large cargo flows coming by transit trains. By means of connecting these two cities, a new service will definitely contribute to the development of Russia’s transit potential”, noted Sales Director of RZD Logistics Olga Stepanova.

The service is the second direct train service between China and the Netherlands. The first is the connection Tilburg-Chengdu, operated by Chengdu International Railway Services (CDIRS) in partnership with GVT Intermodal. This service offers three weekly departures in both directions on a train with 41 containers.

In March this year a test run was carried out between the port of Amsterdam and Yiwu. Once this service is realised as a regular connection, it will add up as a third railway service between the Netherlands and China, while connecting a new destination in the European country. Rotterdam is linked to the network with a regular train connection to the terminal in Tilburg, a service called Gateway Rotterdam Mid-Brabant.