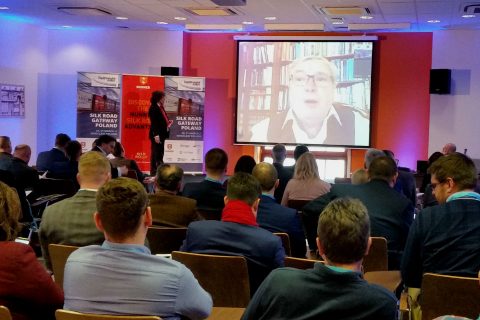 The Western End of the New Silk Road

Do not just look at the New Silk Road from a western perspective, plead Richard T. Griffiths, one of the speakers at the Silk Road Summit in Poland last week. “Europe must settle its own affairs, ánd accept Chinese conditions”. This is a summary of the paper ‘The Western End of the New Silk Road’, prepared by Griffiths.

China’s New Silk Road project has embraced the myth ánd reality of the traditional silk road to emhasise that promoting investment in the infrastructure will lead to peace and prosperity in the countries involved. The comparison with the past applies as such, that trade may flourish in times of peace.

The repsonse of European leaders to the Chinese initiative has been hesitant. Only at a European-Chinese meeting in July 2015, almost two years after the New Silk Road project had been announced, the European Commission (EC) launched a ‘Connectivity Platform’ that should enable both Chinese and European stakeholders to set up joined projects and develop a synergy between the silk road projects and various European infrstuctural projects.

One year later, the EC drew up a new strategic vision, which was to inform the Chinese that European stakes would be prioritised. This included a lecture addressing the Chinese regarding liberalisation of trade, compliance with the international economic system and respecting human rights. Europe added, that it would assist and advise the Chinese in these regards, and materialise its promise to develop the silk road into an open platform.

Europe also knows its own connectivity plan. This plan was not attached to a famous name or legend. It was full of ambitions when it was announced in november 2014. The aim was to improve the European infrastructure by, for the first time in history, operate on a pan-European level. At the same time the EC introduced the European Fund for Strategic Investment, focusing on infrastucture and innovation. An initial capital of 21 billion Euros was provided by the EU itself, with the intention to gather around 315 billion Euros in the year after. When Claude Juncker anncouned the plan to the European Parlement, he noted that ‘Christmas came earlier that year…Europe is back in business’.

This plan did however not change the fact that the freight market share of railway has dropped since 2000. This is partly caused by a lack of competition, insufficient procedures for the transportation of cargo by rail, neglect of railway infrastructure in some countries and a lack of coordinated safety conditions. In addition, many countries prefer the development of road, rather than rail.

Despite the fact that Europe has known a unified internal market since 1992 and several East-European member states since 2004, there is still nothing like a single transportation network. There are six different electrification standards, and twenty different regulations for the maximum lenght of trains. That is not really the strongest position from which to lecture the Chinese about interoperability along the New Silk Road.

The big Silk Road project was revealed tot he world in a speech by Chinese president Xi Jinping in 2013. During a gathering of Asian leaders in Astana, Xi claimed that the old silk road was an example of how countries with differnce in race, religion and cultural background could co-exist peacefully and share in the profits of peace and prosperity. Xi outlined a project based on cooperation between countries, which should lead to easier trade. Analysts in the west responded with hesitation. Some interpreted these words as an urge of Chinese expansion, forcing the Chinese principles upon those of smaller countries.

The New Silk Road is mostly build on Chinese loans, which are mostly ‘connected’ to activities of a Chinese company. The loans are generally funded by Chinese public banks and are often provided to state-owned companies that carry out works for the project. Although discussions in Europe are about the construction of a railway by the Chinese, this is not actually the case. Chinese funds may enable the constuction of railway in neighbouring countries, but this does not only benefit the Chinese companies.

There lies an opportunity for western companies and countries. Instead of causing panic about the Chinese influence and development of the New Silk Road, the west should applaud the Chinese contribution. It should realise, that Europe invests outside its continental borders much more than China. In 2016, the EU invested outside Europe twice as much as China outside its own borders (360 billion Euros, respectively 149 billion Euros).

The difference is that China takes its decisions faster than the EU with its 28 souvereign member states. If European countries want to participate in and benefit from the development of the New Silk Road, the continent should first consolidate its foundation. The trans-European network should be completed and standardised as soon as possible. If Europe cannot guarantee interoperability on its own network, it is meaningless to call for interoperability as a condition to participate on the New Silk Road. In addition, Europe should accept that Chinese loans will continue to be connected to Chinese companies, and calling for an open market and liberalised trade will not change these facts.