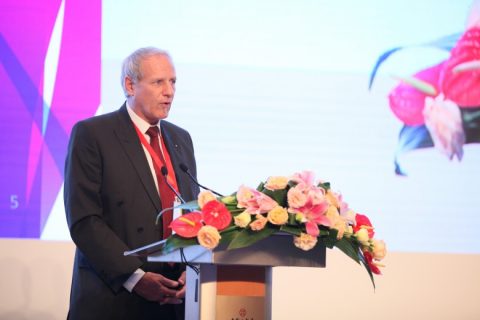 The number of railway connections between Europe and China have increased enormously in the past twelve months, which has contributed to a surge in freight volumes transported over this distance. However, current growth rates are mostly due to subsidiaries from the Silk Road Fund and taking steps to guarantee the train services offered in the long term is indispensable, GETO stated.

The Swiss organisation representing the interests of European operators argued for a more balanced distribution of trains across all of Europe. “Basically, we need better coordination between China and Europa – between the departure platforms in China but also between the platforms and operators, most of whom actually come from Europe”, said Hans Reinhard, President of GETO and Vice Chairman of the CCTT.

“Intensified coordination between platforms as well as between operators is essential to improve the utilisation of trains. In my opinion, Yiwu has done unique pioneering work in this respect with destinations in Europe that have been met with enormously positive acceptance in the market, like for instance Madrid, or more recently, London.”

A further reduction in tariffs for railway lines, wagons and containers must be realised so the current price level based on subsidies can be maintained in the future. The price reductions must be initiated most especially by the state run railway companies, GETO also mentioned. “Most railway managers and operators are likely to push the downward trend of actual costs, an indispensable trend to safeguard the train offers for the long term in especially the eastern direction”, the organisation explained earlier.

GETO also argued for the establishment of so-called hub systems at CIS entry and exit border points to compensate for the varying permitted train lengths in this region. “Using border hubs to form longer trains for the journey through the CIS countries, to break these down into smaller lengths once entering the European railway, will guarantee the maximum capacity of trains and thus further reduce the costs”, it explained.

Reinhard further addressed various structural inadequacies in Europe that in his view, have to be remedied urgently for the optimisaton of Eurasian freight traffic. “We need additional railway lines, more locomotives and wagons, and additional locomotive drivers”, he pointed out.

Shorter transit times are another point of improvement, the organisation believes. It suggested synchronised departures following a fixed schedule. It also pleaded for end-to-end IT structures for a smoother handling of cargo, as well as attractive models for the return of containers.

‘Freight tariffs on the New Silk Road must be safeguarded’

Eastbound train service from Paris to Xi’an is in operation